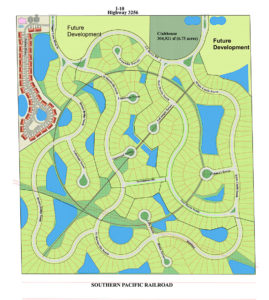 Developers of Sugarcane Townes, a 600-plus-unit neighborhood planned just west of Iowa, La., off Interstate 10, will begin dirt work on the project this summer.

The neighborhood, located 15 minutes from downtown Lake Charles, will offer “affordable, high-standard living options” to meet the area’s growing housing needs, according to development director Alonso Bravo. It will include 517 single-family units and 144 townhomes when completed.

Amy Jones, project spokeswoman, said Sugarcane Townes is the largest development of its kind in the eastern part of Calcasieu Parish, extending over 200 acres and costing developers $200 million.

She said street names in the neighborhood will draw upon the area’s history as sugarcane farmland while the homes will be “Acadian style, with a very heavy French influence.”

“They’re going to be a throwback to the plantation style that we love here in Louisiana,” Jones said. She said the developers are looking to build modern, functional homes that pay homage to Louisiana history.

They expect to start building in early 2018 and allow residents to move in later that year. In total, the project should take seven to eight years to complete.

“They really see the opportunity and potential of everything that exists in Lake Charles,” she said. “The timing just felt right.”